The last batch of elimination matches in each division kick off this week as the Nelvana division finds its third contender. Will it be Lynn? Will it be Bob? Will it be Colin? Listen as they musically globetrot through a round about songs with countries in their titles, then get physical-physical with another DVD extras round, perusing the special features of second installments in mega movie franchises. It all caps off with one shell of a lightning round, and our next winner is crowned! 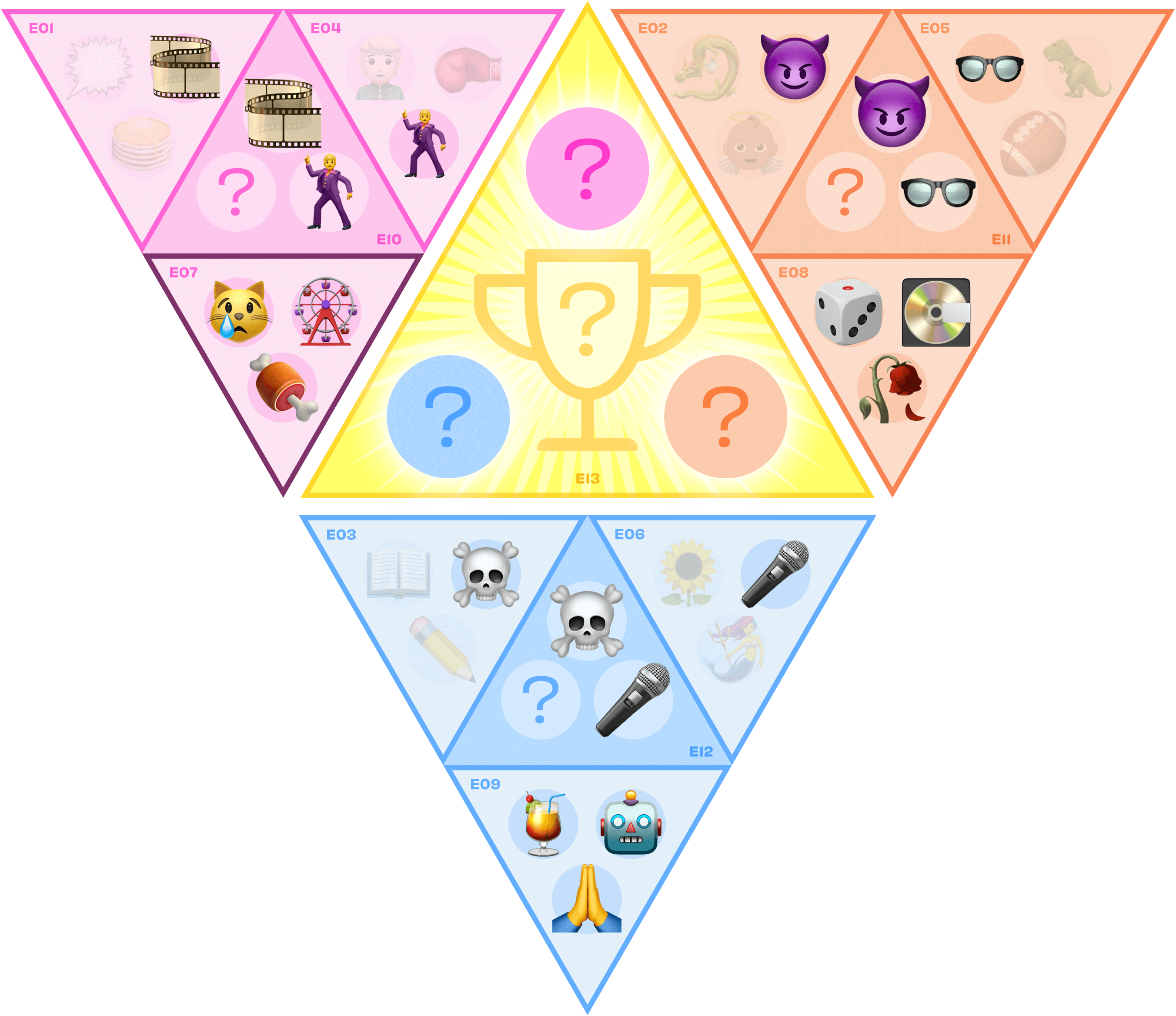 Who is going to have the best professional relationship with their real or hypothetical sibling?

Identify the song with a country in its title.

Name the second-produced blockbuster from descriptions of its home release extras.

She's set on a path to uncover a murder,

Caught between roles of 'outcast' and 'community herder'

A family deception, through their lies she sees.

But what's her mom doing with those frozen peas?

While Mare of Easttown generally succeeds as a character study and an examination of the community of Delaware County, Pennsylvania, it is all wrapped around a murder being investigated by the titular Mare. While she's a bit of an outcastt, socially, she also knows all the ins and outs of the people of Easttown, marshalling just the right people to help in tricky situations. The series evetually reveals the the Ross fmaily covered up Erin McMinniman's murder, along with their involvement in the events that led to it, but Mare eventually uncovers the truth. One of the few comical moments in the series is Mare's mom (Jean Smart) hiding her ice cream inside a bag of frozen peas.

In Spanish, "The rain in Spain" is rendered as "La lluvia en Sevilla es una pura maravilla," or "The rain in Seville is a true marvel."
Sadly, we didn't get to hear Dave's Tom Waits impression, so we don't get to hear him croon, "The captain is a one-armed dwarf. He's throwing dice along the wharf."
Postcards from Italy is Beirut's biggest hit, but don't take that to mean it's actually a big hit. Still, pretty good for a band with a genre described as "Balkan folk, world, indie folk, electronica and baroque pop."
It's time for the Blake Bohr's Lakeshore Shake Store scorebreak! Blake Bohr's Lakeshore Shake Store: Take our Lakeshore Shake Store Floor Tour and slake your ache for shakes when Blake Bohr's Shake Pour Corps makes your Corn Flake S'more Shake! [I will not encourage this behavior. 3/10]
Avengers: Age of Ultron would have made the cut, but while it is the second Avengers movie, it's not called Avengers II.
The other deleted scene from Toy Story 2 is called "Godzilla Rex," which sounds much cooler than "Crossing the Street."
The "Turbo-Charged Prelude" to 2 Fast 2 Furious, weirdly, has Minka Kelly in an uncredited role.
The fictional in-movie sequel to Spaceballs is actually called, Spaceballs 2: The Search for More Money.
The release of Face to Face was highly contentious, as there was a fight over who had the rights to the release outside of the Batman Returns soundtrack, and the promo videos, which the studio didn't like.
The TCM wineclub scorebreak. The TCM wine club, because who doesn't want a bottle of Burt Reynolds red? Mmmm... hints of Deliverance. [Wine clubs are all scams, so mocking them is a good thing. 6/10]
The TCM wine club really does sell a "Burt Reynolds" branded wine.
In Wall Street "Blue Horseshoe Love Anacott Steel" is a codeword for insider trading.
William Sadler plays the evil Senator Vernon Trent in Hard to Kill.
Bob is a panelist on The Great Pop Culture Debate.
Lynn thinks our listeners might enjoy the ATX Festival.
Colin works with the charity Vet Tix.