The season six playoffs have arrived, where our three returning victors battle it out for a spot in the finals! Some quick musical deciphering of TV themes heats things up in round one, before a second round about characters who are both literally and figuratively blue. But will it be Colin, Sean, or Adam who can pull off the strongest lightning round and advance to the championship match? 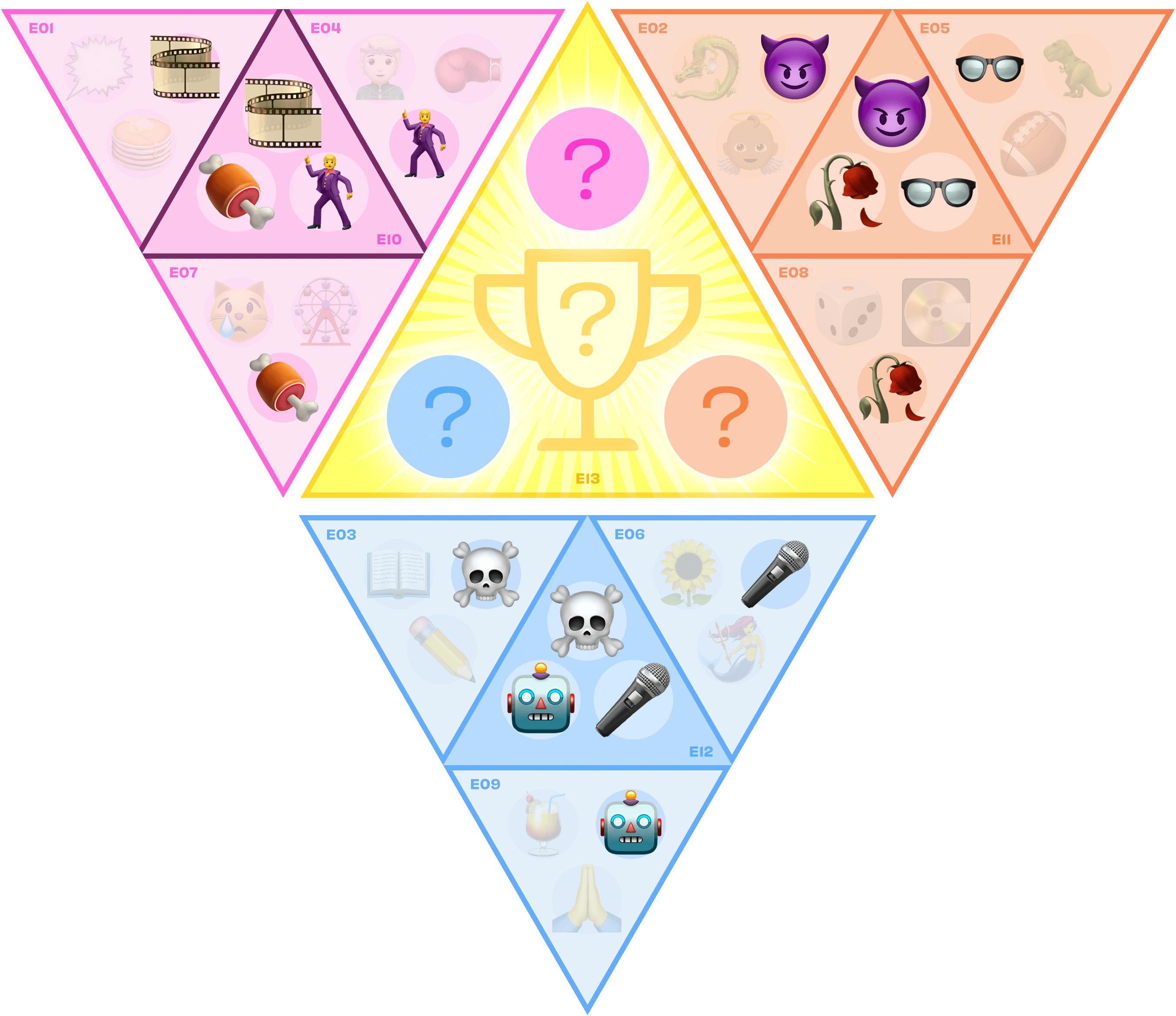 Who is best going to prepare, present, and serve a plate of shiitake mushrooms?

Identify the TV theme from only the first and last second of it.

Pop culture questions with answers that have a month from the Gregorian calendar in them.

Room on the Door

Questions about the works of Dreamworks Animation.

Two seasons on Fox was all you could see

Of this horror-filled tale, injected with Glee

Scream Queens was a horror comedy series that ran for two seasons on Fox from 2015-2017. It was often described as "American Horror Story meets Glee", as Scream Queens was also created by Ryan Murphy, Brad Falchuk, and Ian Brennan. The killers in each season were the "Red Devil" and the "Green Meanie," set at a college in season one and a med school/teaching hospital in season two. A fan favorite character was Chad Radwell, a golf-playing frat boy doofus played by Glen Powell. RIP Chad Radwell.

The odd juxtaposition of the content of It's Always Sunny in Philadelphia and it's theme song is pretty much just an accident.
The theme song to the Pretty Little Liars spin-off The Perfectionists isn't exactly the same as the PLL theme, but it's pretty close.
The Deadwood Score Break! Deadwood! What if The Wire and also The Sopranos and Tombstone but make it Shakespeare? Welcome to bleep sound effect Deadwood! [7/10 Nice thought, and I like the "what if.. but" construction]
Of the "Blue" albums, only Joni Mitchell's is considered a transcendent masterpiece (as much as we might like Third Eye Blind)
The Beatles "blue" album is a compilation of their 1967-1970 hits, issued in response to a popular bootleg compilation.
You will be shocked - shocked! - to find out that people have been having fun with "jizz" and the related, more old fashioned genre of "jatz."
John Frankenheimer is the replacement director of the trainwreck that was the 90s version of The Island of Doctor Moreau.
"Ridge" from The Bold and the Beautiful has a dumb name, but the producers got it from the name of a friend from Lake Geneva.
The "Adults from Charlie Brown" Scorebreak. The Adults from Charlie Brown: (Wah wah noises for 10 seconds or so) [6/10 Saw it coming, but a muted trombone is always appreciated]
For anyone worried about the "room on the door" clue, the Mythbusters proved that Jack and Rose could have both survived on the door - but only if Rose had thought to use her life jacket to increase the buoyancy.
The Alexander Pope poem "Eloisa to Abelard" is one of his better ones: worth revisiting!
Since John Stewart was Green Lantern in the Justice League cartoons, many people regard him as the real Green Lantern from Earth.
Adam thinks folks should revisit things they like to see what they're going to like in the future.
Colin thinks you should get a dog
Sean thinks you should follow him on Twitter.