Here we are, the last playoff match of season before next week’s championship bout! Returning victors Ian, Megan, and Danny test their knowledge of a thing we do not talk about. Round one will throw a dinner party for our favorite title characters before round two dives into the byzantine logic behind the titling of movie sequels. A customary lightning round caps off a tense match. See you next week for the season finale! 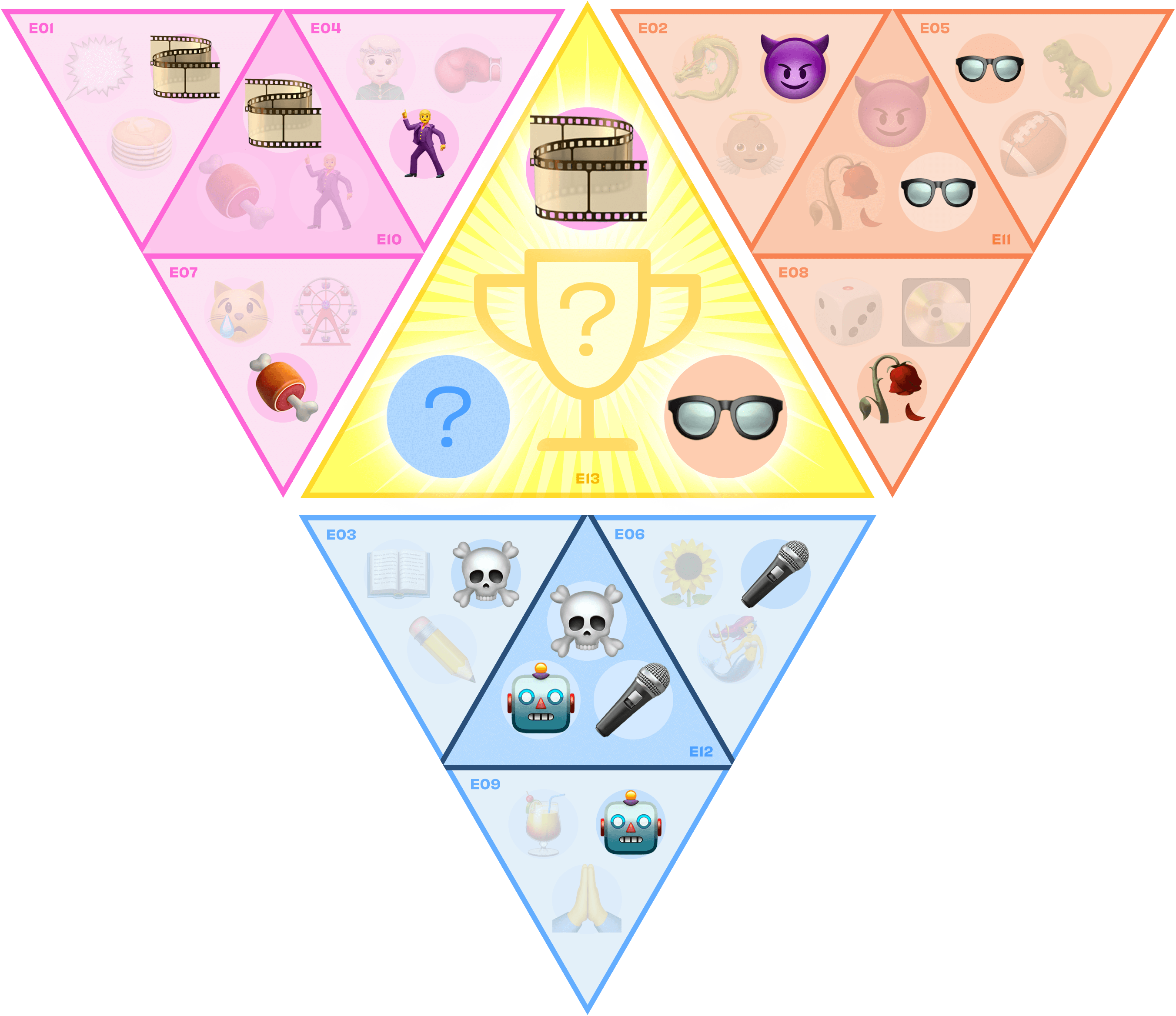 Which champion would have the most appropriate reaction to a fight between a polar bear, a black Labrador retriever and a man who could hammer the roman numerals VII into your head?

We're throwing a dinner party for a motley group of characters! Say hello to titular guests from one-word movies and TV shows.

Identify the movie franchise from up to three series subtitles.

When Pippa Gets In-Laws

Questions about the pop culture happenings of 2011.

Out Of Bodies Experiences

Of a famous trilogy, I acted in three parts.

I cracked murders on Hallmark with puzzle solving smarts.

As an urban cartoonist, I never had much luck.

I hope I'm not remembered for my romance with a duck.

Actress Lea Thompson was in all of the movies in the Back to the Future Trilogy, and later played a soccer mom recruited to solve crimes in Hallmark's nine Jane Doe movies. She also had the title role of a cartoonist in New York on Caroline in the City, which never achieved the critical or commercial success of the other must see TV shows. Still, it's better than her lead role as the romantic interest in Howard the Duck.

If you were in college, you definitely saw the Fight Club rules on a poster, but for everyone else...
Apparently, you all remember the 1983 John Carpenter Christine, rather than the 1958 Pierre Gaspard-Huit Christine, about the doomed love of the Baroness von Eggersdorf.
The distinction between Tron the movie and "Tron" the character in Tron the movie is a little difficult if you weren't paying close attention to the mostly nonsensical plot.
The Mahna Mahna scorebreak: Mahna Mahna - The song Jim Henson discovered after it was used over footage of young women in a sauna in a "documentary" about sex in Sweden called Sweden: Heaven or Hell. [7/10: informative, but a little on the wordy side]
Whatever else you want to say about 3 Ninjas: High Noon at Mega Mountain, you've never seen Jim Varney like this (with a sword, trying to kill some children).
Police Academy 4: Citizens on Patrol was the last in the franchise to feature Steve Guttenberg. They made three more.
The Lost Boys sequels are The Tribe and The Thirst.
Unfortunately, we had to take out the oddest game in the Castlevania franchise: the pachinko version of Rondo of Night that advertises "graphic violence."
The Arthur M. Schlesinger Jr. Scorebreak. Arthur M. Schlesinger Jr: I'm sure Dan will have something for this. The Imperial Presidency is both presicent and the most scathing imaginable rebuke of Nixon, and I love that they wound up as neighbors later in life. [8/10 straight pandering, but I'm not above that.]
Sean Bean really does get killed on screen a lot.
Karnak is one of The Inhumans! Everyone loves The Inhumans!
Alternately, Carnac was a bit on Johnny Carson.
Megan wants listeners to support local public and school libraries.
Danny wants them to support their local Planned Parenthood
Ian doesn't have anything to plug himself, but he seconds what Megan and Danny said.