This is it, y’all! We have made it to the season six finale with three absolute tanks ready to duke it out to become our next super mondo champion of champions. Look out for odd premises in round one where we insert the surnames of actors into unrelated properties that have their first name. But keep your eyes on the floor for round two so that you don’t step on the bricks from the pop culture Lego sets we’ll be quizzing our players about. Then an absolutely FAB lightning round caps off another exciting season! See you next week for something special! 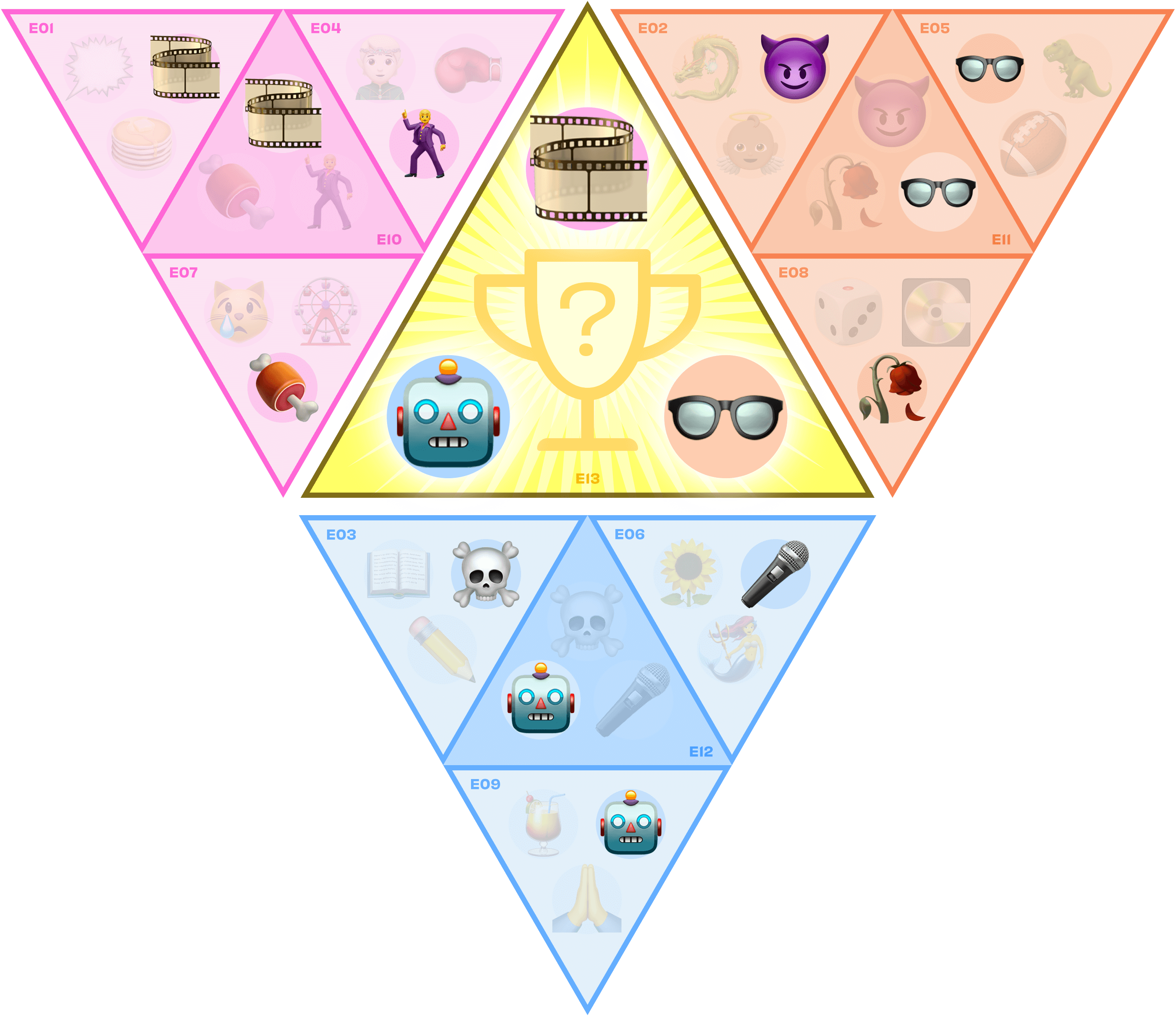 Who is going to be the best writers' room assistant during the production of the sixth season of a prestige cable drama?

Everyone Likes Their Own Brand

Identify which celebrity has taken over an existing song, movie or TV show.

Another Brick in the Wall

Guess the pop culture property from a description of a Lego set.

Questions about funerals in pop culture.

Honor Just To Be Blipped

Academy Award nominees in the cast of Avengers: Endgame.

The third film in a series -- now up to five

One from Coupling won't make it out alive

And it all begins with an inversion to find a locker.

While the subtitle of the third Pirates of the Caribbean film has the finality of < strong >At World's End, they somehow made two more of them in the intervening years. Jack Davenport's character, Commodore Norrington, meets his end in this movie. Villain Davy Jones captains a ship called "The Flying Dutchman." Keith Richards of the Rolling Stones, one of the inspirations for the characterization of Captain Jack Sparrow, cameos in the film as Jack's father. The opening sequence of the film involves a trip to save Jack from Davy Jones' Locker which they get to by flipping their boat upside down.

Note that we're talking about the 2011 show called The Cape, not the 1996 Adam Baldwin/Corbin Bernsen astronaut drama by the same name.
Kenneth Branagh wasn't in Thor, but he did direct it.
Henry Cavill cocking his fists in Mission: Impossible Fallout, is an amazing scene, just try to ignore all of the continuity errors that show up halfway through.
It's actually "Ah-Melee Blunt in Par-ee"
For those in the know, the reference to Rhonda Rousey's signature armbar is a dead giveaway.
The DuMont Network Scorebreak. The DuMont Network: Gone before I was born, but still a reliable punchline in the right crowd. [10/10, no notes.]
The "Yaaas Queen" sign is nice, but the Queer Eye Lego set also has a mirror, which is very cool.
The Prince of Persia Lego sets are pretty cool looking actually. And calling it "Alamut" makes it a low-key Assassin's Creed Crossover!
There are several Green Lantern lego sets, under the DC Comics Superheroes Line.
The Dogs Scorebreak. Dogs: The fuzzy weirdos who live in your house. They follow you to the bathroom, lick the sofa, refuse to go outside when it’s cold, snore really loudly, and take over most of the bed. Dogs. They’re the best. [7/10. We all love dogs. Pleasant, but needs some pizazz.]
George Carlin did, indeed, have a 90s sitcom. He played a cab driver.
Kevin Costner was much younger than the rest of the cast of The Big Chill, but it makes sense, as he would only have been seen in flashbacks.
If you want a deep dive into "The Worst Toilet in Scotland," here you go.
Ian is putting in a plug for Global Giving.
Sean would like to plug toilets. Or at least toilet puns. And Frankie's Fishnets.
Listen to Paul on the Trash Art and the Movies podcast