Deb, Derek, and last minute fill-in, returning player Adam are ready to flex their pop culture knowledge this week! Round one is a carbo-loaded extravaganza of pop culture properties that have all been breadified, before round two dives into the unnecessary backstories of iconic characters. And it’s all capped off with an exciting lightning round! 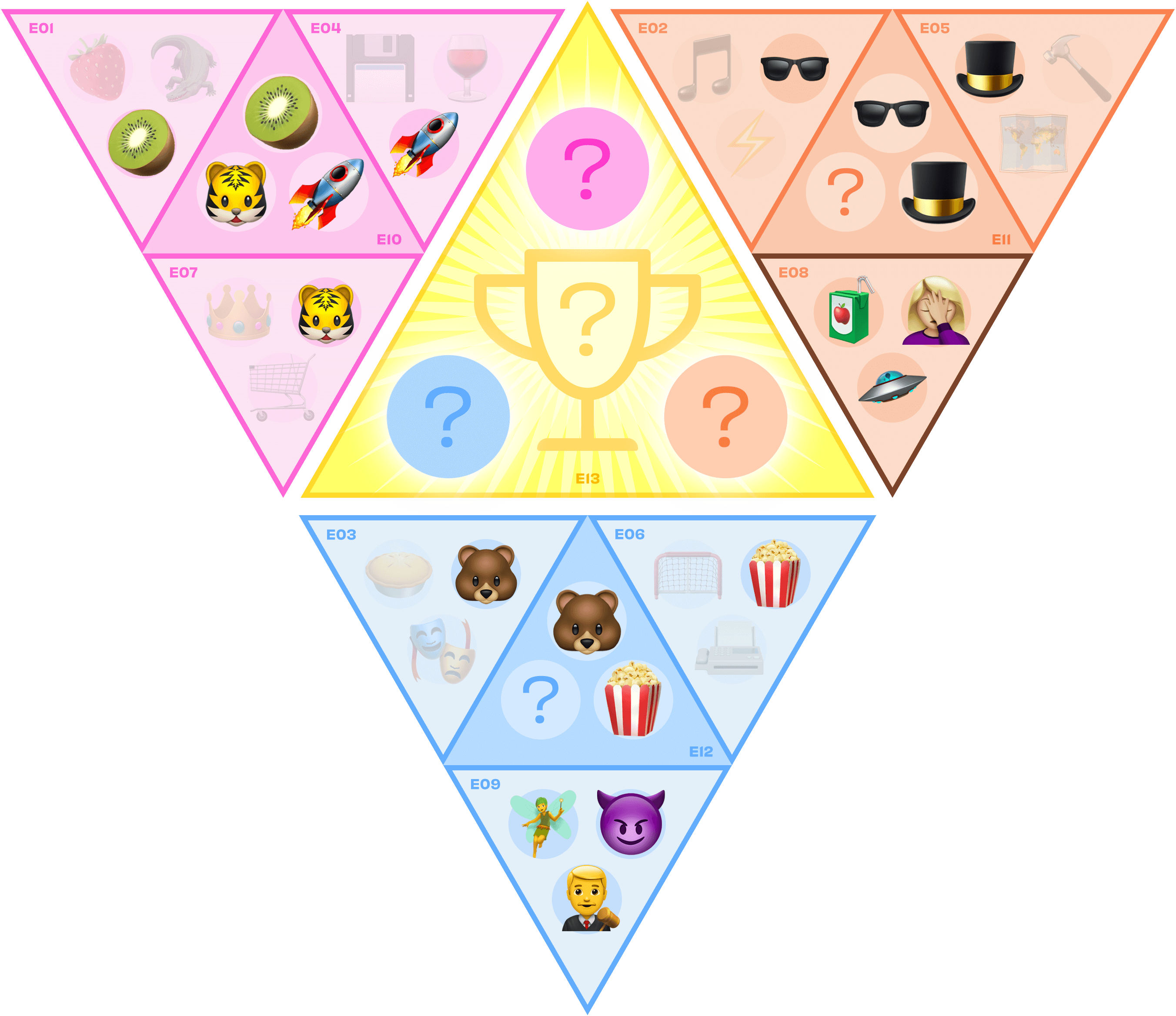 Which champion is the most likely to be a shapeshifting alien sleeper agent in disguise?

No One Was Asking

Name the character whose complicated backstory is being described.

Fun With Dick And Jane

General pop culture questions with the word "Dick" or "Jane" in the answer.

Questions about actors who appeared in 1988's "Christmas at Pee-wee's Playhouse."

More Than A Music Video

Periods combine in this anachronistic stew.

With a leading man straight out of "The Who,"

A spaceship, a voodoo doll, some Frankenstein magic,

Even after they die, the ending's not tragic.

In the buck wild 1975 Ken Russell movie Listzomania, Roger Daltrey of The Who stars as Frank Liszt, who someone meets up with Wagner, Brahms, Mendelssohn, who were not active at the same time, and gives Liszt and computer, leading him to talk to Wagner about electronic music. Oh, and that's all before Liszt is killed with a voodoo doll, leading Wagner, who's actually a vampire, to be resurrected, as Hitler, with some help from Frankenstein. But it's OK, because Liszt goes to heaven, where his music has redeemed even his murderer, and they get a magic spacecraft that they use to kill Wagner/Hitler.

Alan Tudyk was K-2SO in Rogue One. And has been a voice in every Disney Animated film since 2012.
His direction of Dead Again led Roger Ebert to compare Kenneth Branagh to Orson Welles, Hitchcock and Olivier.
Ready or Not is funnier than you think and has a great turn from Andie McDowell (who doesn’t show up in a lot of horror movies).
For a show based on a major movie franchise, Treadstone didn’t make much of an impact.
The Liberty League Scorebreak. The Liberty League: No, we're not in NESCAC, we're actually in the Liberty League. [1/10 No idea what this is about.]
Nokia did a bunch of DC Comics movies tie-ins and product placements. All with Windows phones. Which is why you’ve never seen them.
Luke Evans is the one from Fast and Furious 6 and The Hobbit series.
There was also a backstory for Slimer from the Paul Feig Ghostbusters, but it didn’t make it into the film.
Pac-Man and the Ghostly Adventures goes real dark. The ghosts are actually dead people!
There was a Sopranos video game, but it wasn’t an open world game. It was also, you know, not very good.
The Cat Party Scorebreak. The Cat Party: Hey Boris! You're not invited! [2/10 I like cats, and Boris is a funny name, but what in the world are you people doing with these today?]
There’s a Blacula reboot in the works, because of course there is.
The Pee-Wee Christmas Special was really something.
Charo was on The Love Boat a lot. But not as much as Florence Henderson.
Deb is on Instagram
Adam can be found on the Muppeturgy podcast.
Adam is on Twitter
Derek does movie riffing at Down in Front.
You can see Derek live with Forgot to Mute.
Derek is also found live at Logan Square Improv.